When Mini and Kalesh went around forming self-help groups, Mini’s husband, PV Joykutty, went with them. Because he was politically active, he was known and respected, so he attracted people. Mini first started one SHG, Darshana, which became one of 28 SHGs in the Thalvady Cluster, formed in 2013. Mini became the coordinator. But later in 2013, a great tragedy occurred in Mini’s life when her husband suffered a fatal heart attack.

Not only a devoted husband and father, her husband had been a man who extended himself to others, even taking out loans for them in his own name. And although they were repaying him while he was alive, once he died, many stopped. In a flash, Mini had lost a very loving and protective husband and was simultaneously plunged into deep financial crisis. 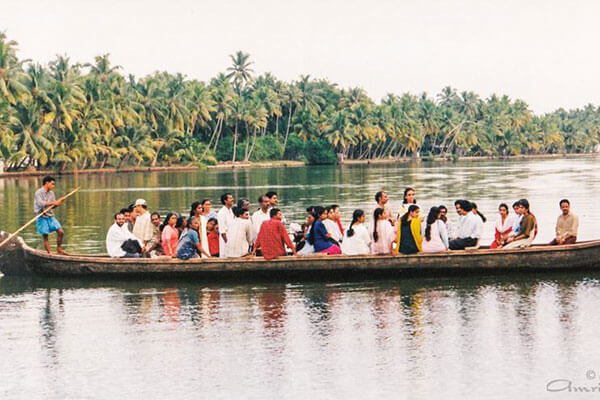 In shock, Mini tried to deal with the financial debt by going to the political parties and government offices that her husband had loaned money to and to which he had otherwise contributed. On top of loans she now had to pay back, she also needed money to buy items for the small shop she and her husband had been running. But the same people who had benefitted from her husband’s generosity now closed the door to his bereft wife and teenaged children.

Overcome with grief and unable to cope with the financial crisis, Mini closed up the small shop she and her husband had been running and stopped going to the cluster meetings.

The AmritaSREE main office sent delegates to help her overcome her sorrow. Somehow managing to climb out of the well of grief she had fallen into, Mini came to one of Amma’s birthday celebrations. There, she noticed a stall with an inspiring array of handmade products set up by one of the SHG groups. By the time she got home, she already had a plan. 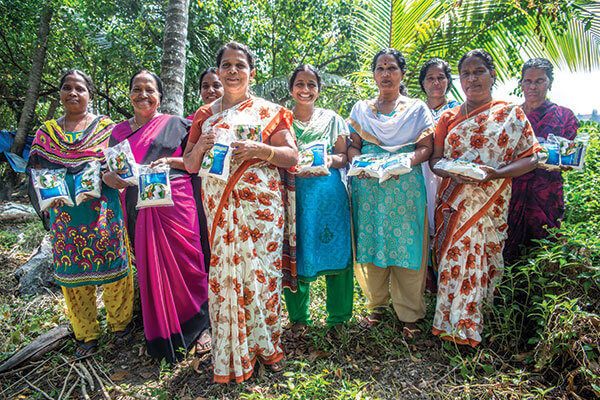 With the help of some SHG members along with one of her husband’s friends, Mini purchased two sacks of wheat and two sacks of rice for her start-up enterprise. After grinding the wheat and rice into flour and packaging it under the label “AmritaSREE”, Mini took her products around her neighbourhood in Thalvady.

Mini, along with her own SHG members, went house to house to sell the products. Initially, the response was not very enthusiastic. “We have very high-quality flour in the markets”, people said. “Why should we try yours?” “Try it once at a reduced price,” Mini offered.

Since Mini prepared her products at her own home, people started to notice the care she took in each step. They watched her washing the grains and then drying them out in the sun. The care and devotion, she exerted during each step of the process, could not be missed. This itself became the advertisement. The AmritaSREE cluster sanctioned a loan of three lakh for Mini with which she has expanded her enterprise and given jobs to two of her AmritaSREE SHG friends.

“Self-effort is so important.” Amma

When Mini began educating her customers about the lack of preservatives in her flour, they became very interested. In fact, the big brand names all add some preservatives in order to keep the flour fresh for a longer period of time. But villagers do not need flour that keeps for a long period of time. At this point, they realized that they wanted a fresher, healthier choice.

Mini’s flour became so well liked that her customers began requesting additional items. “Can you sell us chili and coriander powder?” they asked.

“It was infinite grace that gave me the strength to come out of my sadness.” Mini

With the help of the cluster and some additional business training from the district AmritaSREE coordinator, Kalesh, Mini is also planning on branching out to the rice business. She plans on buying it wholesale and marketing it to the neighbourhood, to shops, and to the cluster itself.

While Mini’s husband was alive, he was always beside her. Not only was he a very loving, caring, and protective husband, but he also took care of the children. In their shop, her husband had taken care of all of the business aspects while she sat and greeted the customers. “I was given the role of a glorified lady,” she recalls.
Recently, Mini opened a small thattutukada — a little outdoor café that consists of some chairs and one or two tables. 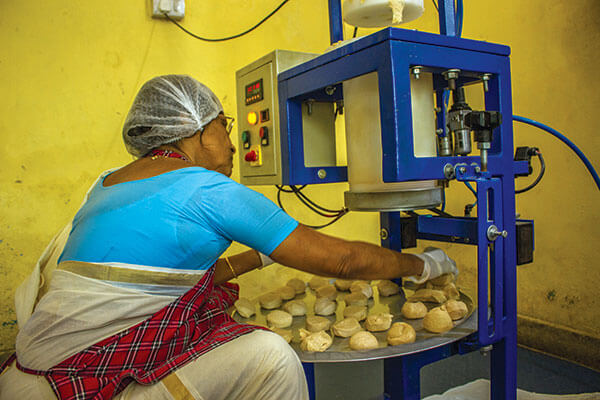 From 6:00 – 8:30 p.m., she makes and serves dosas along with fish curry and tapioca. In her spare time, she and the two women she has hired continue producing fresh rice and wheat flour, as well as coriander and chili powder. Along with this, she has started raising hens and goats to save money for her children’s education.

Although Mini is still repaying the loans her husband took out for others, she is no longer overwhelmed by it. In the past, she recounts, she had been afraid of so many things. Ambulances scared her. And a death in the neighbourhood was so terrifying that she wouldn’t go near the neighbour’s house for days.

Today, however, even her family is surprised by the change that has come over her. The fearless strength that has taken hold of her life is unfathomable.

“See, I have taken care of the children and the loans,” she wants to tell her husband when they meet in the afterlife. “I will always miss you, but I have found the strength to live without you”.