Anitha was a widow with a five year-old son when she joined the Dhana Lakshmi SHG. She led a very lonely and sad life and had no self-confidence. She was totally dependent on her husband’s family. With a loan from the Nirkunnam AmritaSREE cluster, she built a house and started living in her own home.

“Only after joining AmritSREE was I able to live with confidence and discover my individual identity.” —Anitha

As much as the money helped her become independent, the compassion and friendship she received from the group gave her inner strength and confidence. “You realize that you’re never alone”, she narrates. “You develop so many connections. If you have a problem, you can always talk to someone. When we are in grief, we have so many to turn to. You’re much freer, sometimes, when you talk to a friend.” 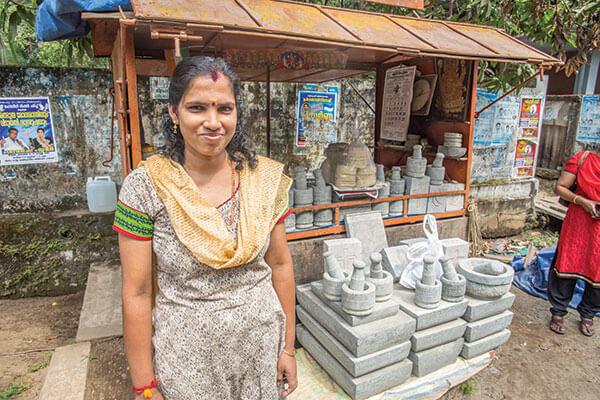 Today Anitha’s son is 25. He works in a shop and is about to get married, so Anitha is taking out a loan for marriage expenses. However, the biggest thing she recounts is the connection she feels with others :

“You meet people with many problems, and suddenly, you don’t feel alone. You become bigger than yourself. Suddenly, you become a giver.”

This sentiment is echoed by many other women. Before they joined an SHG, they were alone to meet their own needs, whereas now they are able to not only fulfill their own family’s needs, but they can also reach out to others. And the more they reach out, the more confident they feel confident to help themselves and others.

In 2012, the coastal SHGs of Alappuzha district, that is nearly 4,600 SHGs, registered as a society. Initially, Beenamma, the coordinator of Nirkunnam cluster, had reached out to women by calling them, whereas today people call her.

The shy housewives of yesterday, while still fulfilling their household duties, now have the confidence to approach bankers, manage accounting records, and speak in public.

“The biggest thing is that they are now so well known outside that they have friends everywhere and are known and respected. They are people of significance. Looked up to. Ultimately, this is Amma’s blessing. Because of this, they do not have to stand with their hands out. They have become self-sufficient. They are proud.”
— Beenamma