“Our greatest success lies in our financial accountability and transparency. This is why people trust us.” — Karuna, Maamud Cluster coordinator

In 2008, Karuna started the Amriteshwari AmritaSREE SHG in Maamud. They started saving Rs. 20 every week during the meetings. The savings were aggregated into a single deposit in an SHG account. One year and a half later, the group with its 12 members was given a bank loan of 32,000 rupees. But it was only after their SHG had joined a cluster that they were able to apply for individual member loans through the collective cluster fund. In this way, they became independent of bank loans. 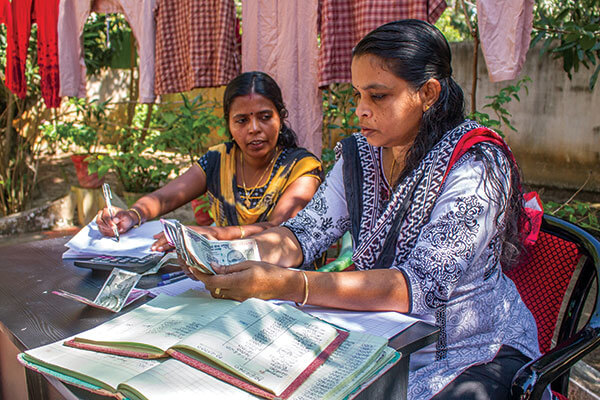 Once a month, Karuna, Nisha, Maya and Nitya travel to each SHG in the cluster to verify that the accounts are transparent and duly updated. So far, they have not come across any major issues. If someone does not pay her balance on time, this person is not penalized in any way. Instead, they are approached with an attitude of love and empathy about their personal problem.

“If there are women who do not comply with their monthly balance, we counsel them. For those with a genuine reason, we give them some leeway.”
—Karuna

Indeed, the training given by Rangannan and Kalesh have made them such finance experts that an SHG run by a nearby church brings their accounts to them to check. Every month they are given a refresher training, which strengthens and upgrades their knowledge.

The biggest asset, according to Karuna, however, is the love that the group generates and shares. As a result of this love and the cluster’s financial success, there are so many people asking to join that they direct them to form their own groups.

“The strength behind our success is Amma’s love and the persistent effort of Kalesh and Rangannan, who go from cluster to cluster monitoring and sympathizing with each individual.”